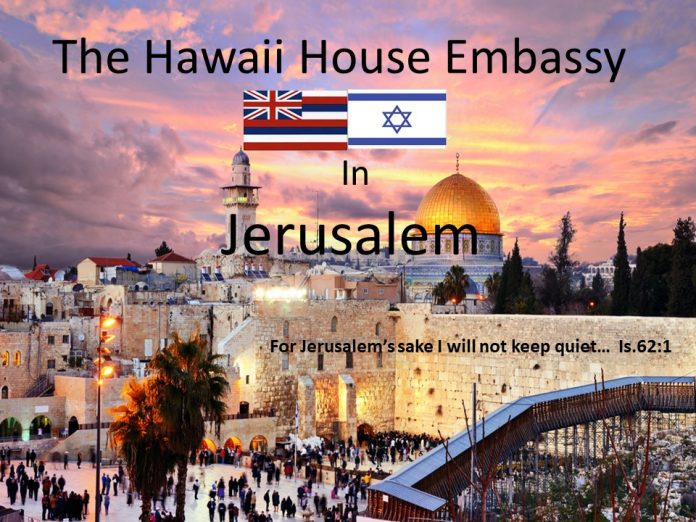 The pro-Israel grassroots organization ‘Hawaii-Israel Alignment’ together with their Hawaii Delegation is happy to announce a historic act never done in American history. The last and 50th state acknowledged by America will take the lead to become the first State to recognize Jerusalem as the undivided and eternal capital of Israel and establish there, an NGO Hawaii House Embassy. They hope to open their doors before the end of this year.

Since the monumental move of the US Embassy to Jerusalem on May 14, there has been an increase of terror attacks and demonstrations on the Jewish State making the ancient capital of Jerusalem one of the greatest controversies in the global community. Hawaii has elected to stand in its defense and initiate a precedent for other states in America to follow.

Establishing a presence in Jerusalem will create a permanent connection in the Hawaii-Israel relationship that began in 1893 with Queen Lili’uokalani and Paul Newman, the first Jewish diplomat appointed by the queen into the Hawaiian Kingdom. After the overthrow, he became her personal attorney and pleaded on her behalf for the restoration of the monarchy. Indebted by his support, Hawaii will stand in defense of Jerusalem and continue our long history of friendship.

Josh Reinstein, Director of the Knesset Christian Allies Caucus has opened the door for the Hawaii House Embassy to be established in Jerusalem. Though Hawaii is a small but significant dot in the middle of the Pacific Ocean, they will add our voice to the choir of nations defending Jerusalem. The Prophet Isaiah tells us “For Zion’s sake I will not keep silent, for Jerusalem’s sake I will not remain quiet… Isaiah 62:1

The Hawaii House Embassy wants to bring warm ALOHA, love and support to Israel and the Jewish community. To make this materialize, they need assistance from the Christian community, leaders of our country and friends of Israel. If you would like to support this historic effort, your help will be much appreciated.  Contributions can be made through their website www.hawaiiisraelalignment.org . Checks can be sent by mail to HIA  P.O. box 728  Puunene, Hawaii 96784 . For further information contact [email protected] .